Confidence. It’s a valuable commodity to have if you’re a footballer who’s aspiring to play at the highest level.

The world’s best and consistently high achieving stars often possess this trait in abundance, with some players sometimes unfairly labelled as egotistical or arrogant, such is the magnitude of their self belief.

For Kevin Mirallas, however, such labels were justified following Monday night’s match against West Bromwich Albion.

The Belgian international has been one of a few leading lights during a difficult season on Merseyside, with a series of swashbuckling performances and goals, particularly in recent weeks, preventing Everton from tumbling further into the mire at the bottom of the Premier League table.

The winger-cum-forward has always possessed undoubted confidence in his own abilities, and it is this prowess and swagger that has endeared him to the Goodison faithful, and will have other clubs clamouring to sign him, if Mirallas feels that the Blues cannot match his own lofty ambitions come the end of the season.

Mirallas has himself revealed that he will assess his future once the current campaign is over, but it was the arrogant manner in which the tricky wide player asserted his dominance over Monday night’s penalty decision that was the main point of discussion in the ensuing 24 hour period that was discussed at length in the national press and on social media websites, with many describing Mirallas’ actions as insolent and inexcusable.

And they would be right.

Mirallas appeared to defy team instructions when he brazenly took control of the ball just moments after referee Michael Oliver had pointed to the penalty spot, following former Everton defender Joleon Lescott’s handball in the box, but what will rankle more among both fans and players alike will be the gall with which the 27 year old refused the calls and pleas of his team mates to let primary penalty taker Leighton Baines take the resultant spot kick. 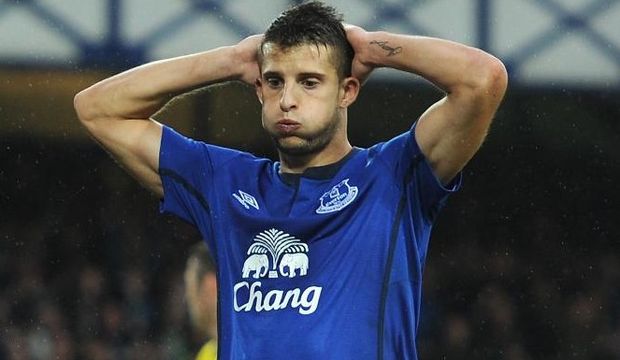 Mirallas’ actions clearly struck a nerve with Roberto Martinez, who hauled his star player off at the interval following this act of hubris, despite the Spaniard later attempting to douse the flames on the incident by citing a niggling hamstring strain as the reason the winger was replaced by Bryan Oviedo, and it would not be surprising if a few choice words were exchanged between Mirallas and his team mates during the 15 minute break – despite public reports to the contrary.

Of course, it is possible that Mirallas apologised for his actions, was removed from the field of play with an injury or that his team mates, including Baines, were confident in his ability to give the Blues a deserved half time lead. For a squad built on harmony and togetherness though, it would seem like too much of a coincidence for Mirallas not to return after the interval.

In contrast, Ross Barkley once again struggled to showcase his irrefutable ability in a season where the 21 year old is epitomising everything that is wrong with Everton currently.

Gone is the swagger and almost effortless grace with which Barkley glided across the Goodison turf last season, and in its stead stands an individual who is bearing all the tell tale signs of a lack of self belief.

Monday night’s clash at Goodison Park was not the type of match that Barkley will have thrived in, such was the paucity of space available for the 21 year old to drive into, but the England international’s lack of confidence shone through in his performance. On numerous occasions Barkley would check back inside after receiving the ball into feet, or play a safe sideways pass, or not pull the proverbial trigger when a shot on goal presented itself, and the youngster even drew gasps of exasperation from the home crowd after being brushed off the ball with apparent ease.

Ideally, Barkley would be withdrawn from the limelight and given time to recover his convictions from last season but, such is the dearth in midfield options available to Martinez currently, there has been no choice but to play the prodigious starlet with the hope that, at some point, last season’s form will return.

Both Mirallas and Barkley are defining the opposing ends of the spectrum of confidence. It would be of massive benefit to Everton if the duo could find a middle ground between the ends that they currently occupy.

There was an air of disappointment that seeped through the cold surroundings of Upton Park on Tuesday, where Everton were concerned.

It wasn’t a disappointment born from an insipid display from the Toffees, however, but one solely from the resulting penalty shoot out defeat that ended the Blues’ 2015 FA Cup run at the proverbial first hurdle.

After performing heroically for over an hour with ten men, following the second half dismissal of Aiden McGeady for two bookable offences, and after coming from a goal down to turn the third round replay on its head thanks to strikes from Belgian duo Kevin Mirallas and Romelu Lukaku, the sadness that emenated from the Sir Trevor Brooking stand that housed the 3,500 strong Everton away contingent, following Carlton Cole’s equaliser and the subsequent shoot out, was paired with another emotion: pride.

Pride in the way that the Blues battled their way back into the match. Pride that those players out on the pitch never gave an inch throughout the 120 minutes. Pride over the fact that, result aside, this was an Everton performance that Evertonians have become accustomed to, and one that alludes to a potential turn around in fortunes after an extremely stick spell since the 3-1 victory over Queens Park Rangers back in December.

Roberto Martinez and his first team squad will undoubtedly be the first to question how Everton’s promising season came to a shuddering halt, particularly over the festive period when the Blues lost four successive league matches to slip to 13th in the Barclays Premier League table, with sections of Evertonians querying whether the Spaniard was the right man to mount a change in fortunes in the second half of the 2014/15 season to haul Everton back into the upper echelons of the league.

There have been signs of recuperation in recent matches  that lend credence to the possibility that the Toffees are starting to find their form, fight and confidence once more – and this was no more in evidence than Tuesday night’s FA Cup third round replay against West Ham United.

Whilst not in possession the Blues harried and pressed the home outfit with intent, embodied by the likes of Steven Naismith who gave no quarters throughout another tireless display, held their defensive shape with greater focus than in recent weeks and never shirked the physical challenges that the Hammers posed throughout a pulsating encounter.

In possession the Blues looked much more comfortable too.  Their passing was fluid and had purpose, there was greater movement off the ball and more notable chances were created, with Lukaku in particular looking more at ease whether the striker was working with his back to goal, running the channels or powering through the centre with the ball at his feet.

Of course, there are still elements of the Toffees’ game plan that need to be rectified. The Blues looked vulnerable on the counter attack once more and, whilst on this particular occasion it can be argued that being down to 10 men and chasing the game leads to more space for opposing sides to exploit, it is a suspectibility that needs to be remedied.

Martinez would do well to arrest Everton’s amount of goals conceded, with goals from set pieces and high crosses a notable concern for the Spaniard. Since beating QPR on 15th December, over half of the goals Everton have conceded have come directly from set plays or high balls into the box. The Blues looked more comfortable in dealing with this threat against the East London outfit on Tuesday evening, Cole’s goal aside, however, which goes some way to showing that the 41 year old is attempting to solve this issue.

If these hindrances can be overcome in the following matches against West Bromwich Albion, Crystal Palace and Liverpool, the immediate future for Martinez, his players and Evertonians will begin to look a little brighter than the one predicted by many over recent weeks.

The shoots of recovery have started to emerge over the past week, and it will take some careful nurturing, belief and confidence to see those shoots bear fruit over the coming weeks. If nursed correctly, those pangs of disappointment will certainly be replaced by proud cheers once more.