It should always be of the upmost importance that football fans be kept safe before, during and after any football match that they attend.

Whether it be a 65 year old veteran home fan, or a young supporter attending his or her very first away match, the safety of fans have to be the number one priority for those in a position to keep the peace.

Which is why yesterday’s and today’s rough punishment, handed out to the travelling hordes of Evertonians, by the police force in Lille should rightly be met with such disgust and disdain.

A number of Everton fans were attacked, by a group of at least fifty Lille ‘supporters’, late last night whilst they soaked up the atmosphere ahead of an eagerly anticipiated Europa League clash, between the two alleged favourites to progress from a tough looking group H. The police’s reaction to Evertonians asking for help and/or safety? The firing of tear gas to ‘disperse the crowds’ and bring back the peace. 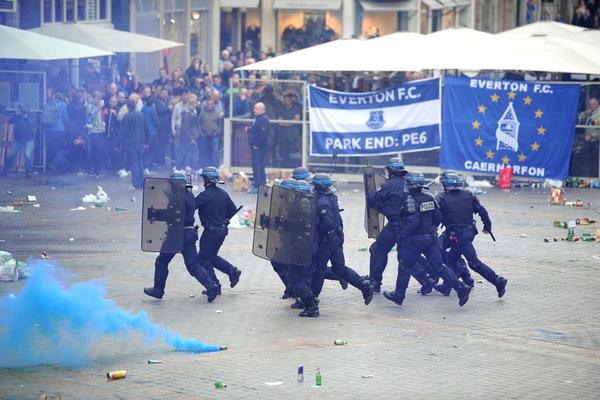 Despite this rough treatment, the incident could have been put down as a one off situation ahead of what could have been an enjoyable city break watching our Club play away from home in the flesh.

Despite numerous reports coming from Evertonians, on social media website Twitter, that there was no provocation or threatening behaviour made towards the French police, officers saw fit to fire tear gas canisters and, allegedly, rubber bullets into the crowds of Toffees supporters who were savouring the atmosphere in and around the Place du Général de Gaulle in the centre of Lille.

This is not the first time that a heavy handed approach has been used in Lille, with police notably using batons and firing tear gas into the away section during a match between Lille and Manchester United back in 2007.

Such unprovoked behaviour gives grave cause for concern, especially with news breaking that children and disabled fans have travelled to watch the Blues in action, and should not be tolerated in this day and age.

Any supporter who attends a football match should come home safe and sound, and not have to be subjected to any kind of excessive force from those in a position that are supposed to provide safety.

Everyone here at NSNO hopes that all Evertonians, who have travelled, are safe and well and that each and every one of you returns home unscathed after, hopefully, watch our beloved team claim all three points this evening.

It will come as no surprise to Evertonians that the return to full fitness of Ross Barkley coincided with the Toffees’ best league performance and result so far this season.

The midfielder was instrumental in the 3-0 victory over Aston Villa at Goodison Park last Saturday afternoon, and he even announced his return with a deft assist for fellow youngster Romelu Lukaku.

And it is Barkley who could help the Belgian striker find his best form after a below par start to the season for the 21 year old.

It is highly likely that Lukaku has not fully recovered from his exploits for both Everton and Belgium over the last twelve months, particularly his efforts for his country at the World Cup following a Premier League season where he started every match he was available for, a first for Lukaku in his still fledgling career, and for a player who relies on being fully match fit to perform at his best.

However, the Goodison fan favourite has still performed at a level lower than was expected of him after the Blues shelled out £28m for his services in the summer, and before the recent international break he even came in for some stern criticism from Evertonians.

The return of Ross Barkley can, therefore, not only boost the Toffees’ season overall, but also be of massive significance to Everton’s record signing.

The young pair were a force to be reckoned with after Lukaku joined the Blues on loan on transfer deadling day last season, with Lukaku proving to be an effective foil up front to the marauding runs and movement of Barkley. With Barkley’s running style and gait allowing him to glide past opponents with ease, the amount of space created for Lukaku to work in was far greater than it has been with a partner like Steven Naismith occupying similar positions in and around the penalty area, regardless of the Scot’s rich vein of goalscoring form thus far this season.

Barkley’s vision and awareness of those around him will be of benefit to Lukaku also, with the midfielder’s creativity allowing for fellow players like Leighton Baines and Kevin Mirallas to manouvere into better goal creating positions in a bid to lay on a potential assist for Lukaku, whilst the Belgian himself can hold up play in the opposition’s half knowing full well that Barkley will not be far away to support him further up the field.

Of course, a below par performance from Aston Villa as a whole, an easier-on-the-eye upcoming run of fixtures and Lukaku’s own personal fitness could also be key components towards the Belgian looking more like his old self, but there is no denying that the return of Barkley from injury is of great importance to the striker, and it is this pairing of two young, gifted footballers that could help propel Everton up the table in the coming weeks.

It is, of course, still too early in the season to even consider any end of season awards, whether it be a club’s own personal awards ceremony or that of the wider footballing world.

The form of Leighton Baines means that it is possible, even at this early stage, to state that the Toffees left back will be in and around any potential candidates list for any such awards.

Baines’ form so far this season has been impressive

Only Cesc Fabregas of Chelsea, Dusan Tadic of Southamption and Gylfi Sigurdsson of Swansea City have laid on more goals for their team mates, at their respective clubs, than Baines has done so far during the 2014/15 season, with the 29 year old notching two of his five assists in the weekend win over Aston Villa.

Much was made of Baines’ ‘lack’ of assists during Roberto Martinez’s maiden season in charge at Everton, but there was certainly no signs of disgruntlement amongst Evertonians, who are, and have been, very much aware of the qualities that the England international brings to Everton’s starting eleven, regardless of whether he lays on the final ball for a goal.

It is pleasing to see Baines receiving widespread praise again, however, and it will be of no surprise to see Everton’s Player of the Season for the 2013/14 season make the shortlists for numerous awards come the season’s end if his form carries on over the course of the current campaign.